Seeing all buses along a route can alleviate bus bunching

For years, bus and BRT control centres have regaled visitors with displays showing impressive real-time information about many aspects of public transport and urban transport systems. One of the many impressive displays shows the real-time location of buses along a route.

Yet this information is hardly ever displayed to passengers waiting at bus stops.

Seoul has a newly installed system which displays the number of minutes until the next bus arrives, and scrolls through coming bus arrivals, but does not show the position of several buses along the same route. Guangzhou has a world class traffic control centre and BRT control centre, but provides no real time information at bus stops and only rudimentary real-time information at BRT stations. In the BRT systems documented at www.brtdata.net, nearly all have impressive traffic control centres with real-time location of all buses along a particular route, but none of them provide that information to passengers.

Showing the location of all buses along a route is potentially far more useful to passengers than just knowing how far away the next bus is.

A technology and advertising firm in Jiangxi Province has finally bridged this gap between control centre and public information display, now providing real-time information of the position of buses along routes in several cities, including Ji'an, where Far East Mobility is currently planning a high frequency bus network as part of an Asian Development Bank project.

Jiangxi Huaxing Information Industry Co., Ltd (Huaxing), incorporated in Jiangxi's capital city of Nanchang in 2007, has developed and installed the electronic displays at bus stops in 32 cities according to its website. The electronic stops in Ji'an were installed starting from May 2016, and are now installed in 80 stops around the city. The Ji'an bus company plans to have 160 of the stops installed as phase 1 of the project. The phase 1 installation is focused on higher demand bus stops with greater advertising revenue potential.

The electronic displays are installed under a BOT contract between Huaxing and the muncipal Ji'an Bus Company.

The electronic displays are installed on a build-operate-transfer (BOT) contract between Huaxing and the muncipal Ji'an Bus Company. The bus company provides the real-time bus operation data, and Huaxing pays the full cost of bus stop construction, operation and maintenance over a ten-year period, in return for advertising rights over this period. After ten years, the bus stop and advertising rights revert to bus company ownership.

The system has several characteristics that so far set it apart from similar advertising-supported real-time bus stop information initiatives, including:


In China and elsewhere there are mobile Apps which provide real-time location information - Chelaile, for example, is perhaps the best - but this requires opening the App and searching for the information with a smart phone and internet connection.

Showing the location of all buses along a route is potentially far more useful to passengers than just knowing how far away (in minutes or bus stops) the next bus is. This information can help alleviate bus bunching, because if passengers see that there are two 'bunched' buses coming close together, and see that the first bus is crowded, they can wait for the bus following close behind. This following bus is likely to be less crowded, and the additional boarding time in the second bus will tend to re-establish a gap between the two buses, alleviating bus bunching along the route.

The fact that the passenger information uses the same screen as the advertising should ensure that it remains in good working order.

Passengers can also see at a glance useful information about bus arrivals. A passenger waiting for route 8 in the photos shown, for example, could see that there is a bus a few stops away, followed by another bus a dozen stops away. They could choose to do some shopping nearby and come back in time for the following bus in 10-15 minutes. For route 8, which averages only 1.5 buses per hour in the peak hour, or one bus every 40 minutes, this is extremely useful information. Without this real-time information about the following bus, a passenger would certainly not want to skip the next bus to do some last-minute shopping. If they skipped the next bus, they would risk having to wait 40 minutes or so for the following bus.

It remains to be seen whether the financing model will ensure high quality operation and maintenance over a long period, whether locations with less advertising potential will be adequately covered, and whether the presentation of bus route information will be displayed prominently enough in relation to advertising. (The bus route information is currently shown too far below eye level for some routes.) Regardless, the Ji'an electronic displays show the way forward for real-time bus information, especially in BRT stations. BRT stations have power supply, security, and ample space for this kind of high quality passenger information which also provides important ancillary benefits by reducing bus bunching along a route. BRT and bus system control centres should focus more on providing their real-time information in a useful way to passengers. 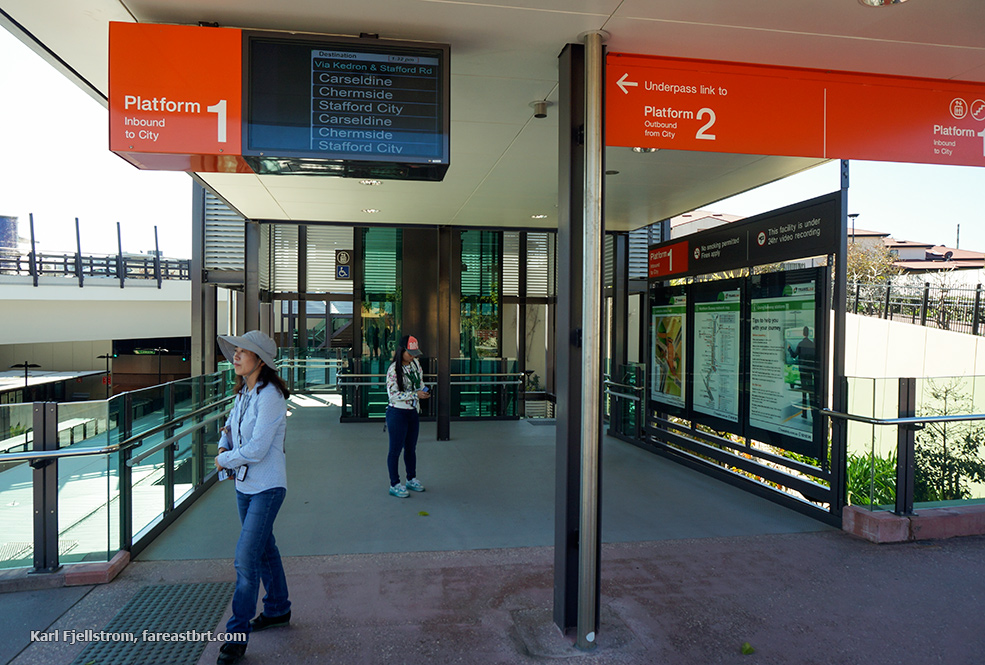